We invite you to visit
Tourist Route
Bunker in Konewka

For groups with a guide – booking in advance is required.

Former hunting residence of the Russian tsars, than the residence of the Presidents of the Republic of Poland. During World War II the headquarter of the German command Ober-Ost. After the war it became a holiday resort. Nowadays Presidential Harvest Festival is held annually in Spała.

In Tomaszów Mazowiecki (15 km) worth visiting is:

We accept payment in cash only

The temperature inside is low. Please bring warm clothes. 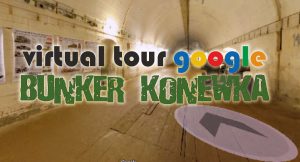